Jin Mao Tower is 420.5m high, with altogether 88 stories and total construction area of 290,000 square meters. It is a perfect combination between the Chinese Traditional Architecture Style and the advanced technologies of the world. It is the third tallest tower on Earth represents a triumph of modern engineering and architectural theory. The spacious, bright and magnificent lobby occupies the first and second floors. From 3F to 50F is large space of office block without column, with each story of 4 m high and 2.7m net high. 51F and 52F are used for mechanic and electronic equipment. From 53F to 87F is the highest deluxe five -star hotel of the world --the Grand Hyatt Hotel, Shanghai. Especially in the middle hall with height of 152m and diameter of 27m, the 28 winding corridors, after being illuminated by neon lights, are colorful and attractive, which make you feel as if you were in a time-space tunnel. The Observation Deck on 88F has a construction space area of 1,520 square meters. It is the highest and biggest Observation Deck of China, breaking the Guineas Record of the Shanghai Great World. Adjacent to the tower is a skirt building of auxiliary facilities, shopping area and entertainment site for business office. 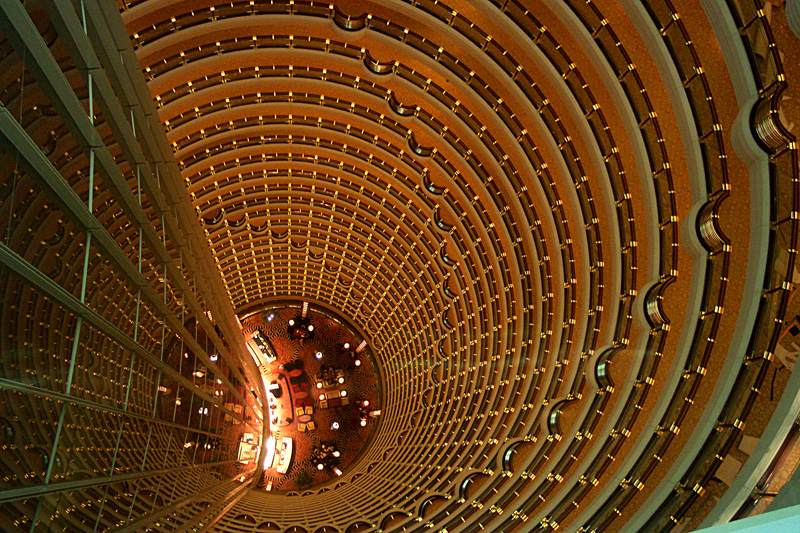 Jin Mao Tower represents the top level of architectural science & technology. The tower has the most advanced glass screen wall with the frame bonderized, which almost eliminates light pollution. In the tower, the new mode of self-rescue is adopted in the fire-fighting and life guarantee system instead of the traditional mode of rescue by others. The best vertical transportation system includes the special lift of the tower , which only takes 35min to reach the office floor and the in-the-air abutment function, etc. The intelligent system of the tower controls all the function and areas, with the information highway leading to each office table and room. Because of its advanced and leading technologies, the tower is a landmark in the history of the world architecture.