Zhangjiajie City, Tujia Ethnic Folk Garden covers an area of more than 1.3 hectares, which is a combination of natural landscapes and culture relics as well as folk customs, and it is a comprehensive tourism service enterprise combining tourism, arts performance, restaurant, hotels and entertainment as one. It was enlisted as a 4 AAAA-Grade scenic spot in 2004 and became a classic tourism route in Zhangjiajie City.

Tujia Ethnic Folk Garden is mainly composed of the architecture clusters of Tujia Ethnic Minority, the Folk Custom Exhibition, the Arts Performance and the other functioning sections, among which the architectures are mostly wood-structured with carved beams and painted pillars as well as the upturned eaves and uplifting angles, splendid and magnificent, and the main attractions in the garden are: Tusi City, Folk Custom Exhibition, the Nine-Layer Heaven and Baishou Hall, Bizika Holy Fire Hall. 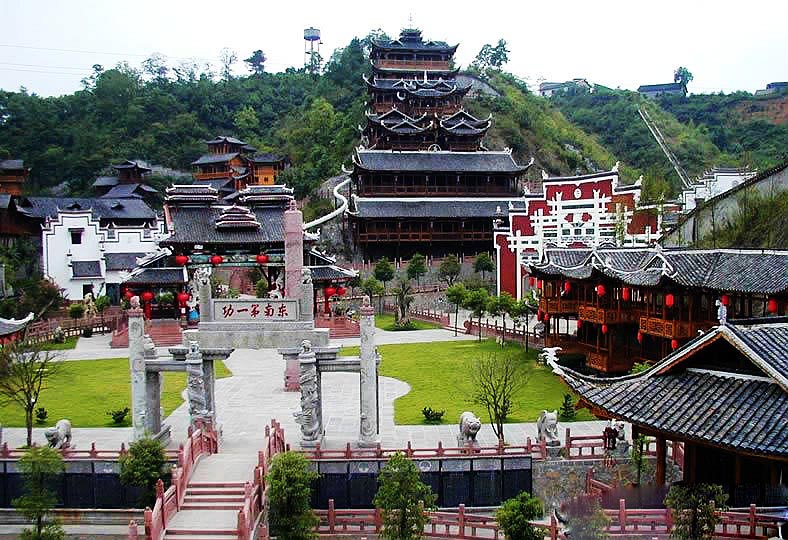 Main spots
● Jiuchongtian Hereditary Hall
The wooden 9-storied Jiuchongtian Hereditary Hall was constructed on a steep slope without using a single nail was even listed in the Guinness World record. It contains thousands of relics of the Tujia and is the "museum" of all things Tujia. Walking through the park, the tourists stopped by wooden houses that showcased different aspects of the Tujia tribe, from unique embroidery skills to farming techniques and wine-brewing, we experienced the typical life of a Tujia villager. The tourists were also able to view the "crying marriage" ritual and learn more about the customs and traditions of the Tujia ethnic minority. 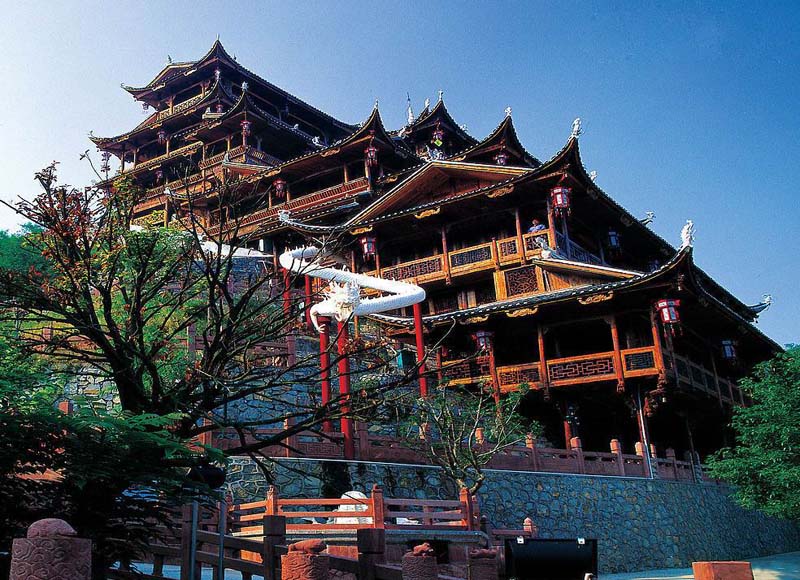 ● Tusi City
Tusi official system was founded in Five Dynasties (907 A.D- 960 A.D.) and become matured in the Ming Dynasty (1,368- A.D.-1,644 A.D.) with the King Tusi as the head of the city. The King Tusi built Tusi City in order to show off their social status and nobility, among which the one in Yongding City is very famous in China. There is the tallest hanging architecture-Diaojiaolou in the city with 12 stories of 48 meters (157 feet) high, which is called the Nine-Layer Heaven by the locals. And the whole architecture is wood-structured without any rivet, which is considered a miracle in the architecture history of Diaojiaolou, and it was enlisted in the Guinness World Records in 2002 together with Maogusi Dancing participating by 1,000 local people. Setting foot on the Tusi City, you can see the Greeting-Guest ceremony firstly: the local men beating the drums and blowing the ox-horns, the girls singing the way-blocking songs, toasting to the guests, dancing and making large-scale sacrifices to their ancestors, which is very splendid and wonderful.

● Folk Custom Exhibition
The main folk custom exhibition includes: adorns, costume, embroideries, rare rocks, batik, root carvings and culture relics, and there are original theatrical performances in the garden, which displays the primitive life style of Tujia Ethnic Minority people in the forms of Maogusi Dancing, Bronze Bell Dancing and Baishou Dancing and singing mountain songs in antiphonal style, giving an impressive impression to the visitors from all over the world.
●Bizika Holy Fire Hall
Built in 2003, Bizika Holy Fire Hall is actually a place for holding performance, and the grand performance "Tujia Folk Custom and the Miao Style" is a well-organized tourism product, which fully displays the folk customs and life style of the people living in the west of Hunan Province through three chapters: Praying for Blessing, Folk Custom and Marriage Traditions.

Tips
Do as the roman dose in the garden and respect the traditions and the customs of the local people.
Take photos when you are allowed.
Protect the culture relics and never throw rubbishes freely.
It is open to the public from 7:30 am to 8:00 pm every day.